Part 1: Introductions to the New Features of iOS 16 Beta Part 2: How to Remove iOS 16 Beta and Downgrade Your iPhone/iPad/iPod Part 3: FAQs about Removing iOS 16 Beta

Part 1: Introductions to the New Features of iOS 16 Beta

Now let us take a look at the important update of the iOS 16 beta, you can see what features you like and what you don’t and then decide if you want to remove the iOS 16 beta.

The new feature will make iPhone your own with all-new ways to personalize your Lock Screen. Showcase favorite photos, customize font styles, and display a set of widgets to get information at a glance.

Widgets on the Lock Screen let you quickly glance at data like the weather, calendar events, date, time zones, alarms, battery level, Activity ring progress, and more from your favorite apps. But if you think this interface is too complex, try to remove the iOS 16 beta. 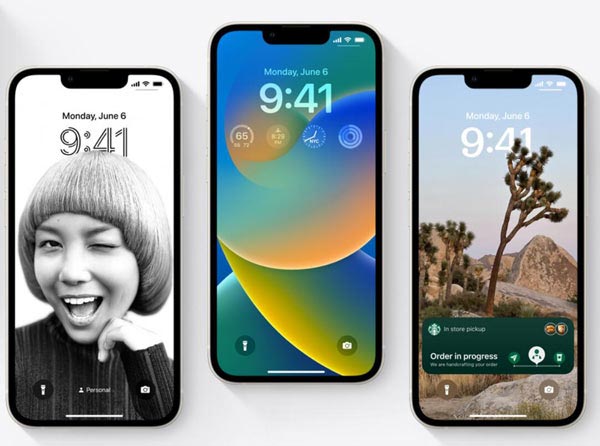 This new section in Settings helps people in domestic or intimate partner violence situations quickly reset the access they’ve granted to others. It also helps you manage which people and apps you’ve been given access to.

You can now hang up your Phone and FaceTime calls with Siri. Just say “Hey Siri, hang up” (participants on the call will hear you). You can enable this feature in Settings.

The Hidden and Recently Deleted albums are locked by default and can be unlocked using your iPhone authentication method: Face ID, Touch ID, or your passcode.

Access and customize AirPods features and settings in one place. When AirPods are connected, an AirPods menu will appear at the top of Settings.

Help users quickly accomplish tasks related to your app by voice or tap. App Intents is a new Swift-only framework designed to make it faster and easier to build great actions — and you can use it to build new App Shortcuts. With support for parameters and synonyms, App Shortcuts let people interact with your app through Siri more naturally.

Securely verify a user’s age or identity in your apps by integrating with the new feature supporting driver’s licenses and state IDs in Apple Wallet. Detailed receipt and order tracking information for Apple Pay transactions are now displayed in Wallet, so you can notify customers about order updates and provide easy access to customer service and order management options.

Now you can see these main features of the iOS 16 beta. But if you don’t like them and want to remove the iOS 16 beta from your iPhone, the next part will illustrate to you how to do it.

Part 2: How to Remove iOS 16 Beta and Downgrade Your iPhone/iPad/iPod

For those people who want to remove the iOS 16 beta, the 4Easysoft iPhone Data Recovery could help you do it easily with a high rate of success and no data loss. You can easily degrade your iOS version without jailbreak. What’s more, it can detect the issues which could happen during the downgrading iOS version. Many people must hear that you can use iTunes to remove the iOS 16 beta, but actually, you are using iTunes to recover your iPhone, you will lose all data from your iPhone then. So, using 4Easysoft iPhone Data Recovery could make the removing process safer than other ways.

Remove the current iOS version and install any version you want.

Keep data safe during the process of downgrading the iOS version.

Fix all kinds of problems that even could happen when downgrading time.

Back up all data to the computer in case of any accidents.

Here are the steps to downgrade and remove the iOS 16 version:

Step 1After you connect your iPhone to the computer, you can click the iOS System Recovery button from the main screen of the 4Easysoft iPhone Data Recovery. Then, click the Start button to start your downgrading process.

Step 2All the information about your device is listed on the program. If your phone also has some problems, you can click the Free Quick Fix button to fix some simple issues. But if you want to downgrade and remove the iOS 16 beta, you need to click the Fix button to do further fixes. 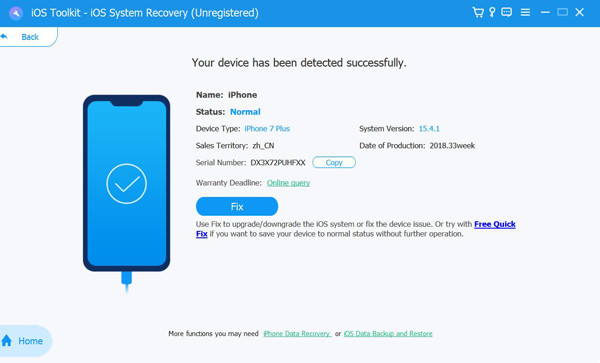 Step 3You need to choose the proper category, type, and model of your device. Then, choose the desired firmware with different iOS versions and click the Download button. Then you can choose to remove your iOS 16 beta and install any iOS version you want. After that, click the Next button to start removing iOS 16 beta and downgrading to iOS 15.

If you already have installed the iOS 16 beta and then find that some new features are not adaptive with your models, or you find your iPhone will get hot after installing the iOS 16 beta. You can use 4Easysoft iPhone Data Recovery to remove the iOS 16 beta with a safe guarantee and high success rate.